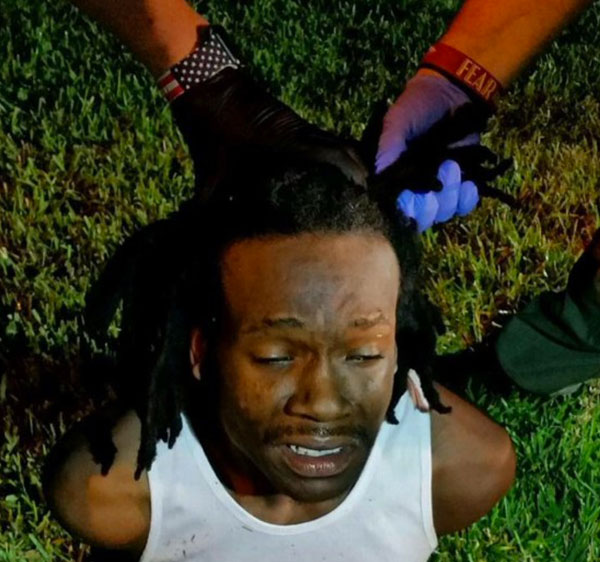 Social media has provided a tight network for people and communities to stay in touch at all times, and its wide outreach has become appealing to more than just regular users. The instant transmission of information has prompted law enforcement to adopt the platforms. But as social media’s role in law enforcement grows, so does controversy regarding the rights of those who are arrested and publicized on the web.

In late November of 2016, the Pasco County’s Sheriff’s Office shared a picture on their Twitter and Facebook accounts of a man they had arrested. Just a couple hours later, the picture had become a topic of serious controversy among the community. The uploaded picture was of 21-year-old Marquis Porter who was arrested on charges of fleeing from police officers during a traffic stop, intentionally running a deputy off the road, and possession of 9.5 grams of meth. The picture depicted the man sitting on the grass with his hands behind his back, crying, and being held by two officers by his dreadlocks. The picture was headlined, “SAD CRIMINAL OF THE DAY: Marquis Porter,” and the post proceeded to list the charges he was arrested for, the actions that were taken, and ended by stating the fact that he cried.

Both the Pasco and online communities seemed to be split on whether or not posting the picture was appropriate and professional from the police department. Some citizens expressed their opposition stating that the post prompted jokes and jabs from commenters, and that there was a difference between raising awareness and simply humiliating and dehumanizing someone on social media for everyone to see. Other citizens believed that posting the image and charges was appropriate and warranted for breaking the law.

The sheriff’s office released a statement saying, “This criminal is not different than any criminal we post about every single day. He was a threat to the community before. It’s important the community know he is in custody and no longer a threat to them,” and later, that the photo was posted to, “illustrate to our citizens the change that often occurs when the handcuffs are put on criminals after they have committed serious crimes.”

From a legal standpoint, however, various attorneys expressed their opposition. They stated that one is innocent until proven guilty, despite what the department might say the charges are, and since a trial had not yet been held, the post could cause a predetermined assumption of guilt in the community.

The Gainesville Police Department is no stranger to social media. It runs fairly active social media platforms and uses them to interact with the community to inform, warn, and even receive information for possible leads. Apart from alerts and community posts, the Gainesville Police Department uploads pictures of arrests for serious cases in Gainesville and of wanted suspects. They even have a “TurnEmInTuesday” with the goal of catching wanted criminals. However, no sizable backlash to the extent of the Pasco County incident has occurred in the Gainesville community regarding arrests being made public through social media. This might be due to how the pictures are posted, which looks like they are meant to inform rather than poke fun or show consequences. Regarding the Pasco County incident, Ben Gorban, a policy analyst for the Police Foundation, stated, “Without the policies in place and the right understanding of the organization and what the organization's standing in the community is, things can come across the wrong way.”

In a poll conducted on 42 Gainesville residents, when asked whether or not they would be likely to share such posts of people being arrested, 50 percent said they would. When asked how they would feel if they were arrested and had their pictures posted, 83 percent said they would be upset about it. Despite their initial answers, most poll participants were resentful towards the practice once they imagined it pertaining to them. A big concern amongst the poll participants who were uneasy with the idea of their arrest picture being shared was for others to see them given social media’s wide reach. In the end, most people thought that sharing arrest pictures on social media was an infringement of privacy. One person who said they would share the post even expressed their belief that whether or not guilt was decided, the unfortunate truth is that as soon as the picture is posted online, people will assume guilt.

Policies in social media regarding law enforcement and what can be done are sometimes not clear enough and differ from department to department. While the posting and sharing of arrest pictures continues, the case of the matter is social media reaches such a wide audience that presumption of guilt is bound to occur, so it is important to have a criminal defense lawyer. If the charges were dropped for Porter, he could possibly build a civil case for libel. If you have been arrested, contact Stout Defense, P.A. for a Gainesville criminal attorney.